The City of Port Isabel is giving notice of the city’s intent to submit a Texas Community Development Block Grant Program grant application for a Downtown Revitalization Program grant request of $500,000.00 for street and sidewalk improvements on Maxan Street in the historic downtown district of Port Isabel.  The application is available for review at the Port Isabel City Hall during regular business hours.

Notice of Intention to Issue Certificates of Obligation

NOTICE is hereby given that it is the intention of the City Commission of Port Isabel, Texas (the “City”) to issue interest-bearing Certificates of Obligation of the City to be designated and known as the “CITY OF PORT ISABEL, TEXAS CERTIFICATES OF OBLIGATION, SERIES 2022” (the “Certificates”) for the purpose of providing for the payment of contractual obligations to be incurred for the design, planning, acquisition, equipping, construction, and renovation of public property, and designated infrastructure and for other public purposes specifically being (i) acquisition of adjacent property for improvements and expansion of existing City Hall parking facility; and (ii) the payment of contractual obligations for professional services in connection with such projects (including, but not limited to, financial advisory, legal, architectural, and engineering).  The City Commission tentatively proposes to authorize the issuance of the Certificates at its regular meeting place in the City Commission Chambers Meeting Room, 305 East Maxan, Port Isabel, Texas, at a Regular Meeting of the City Commission to be commenced at 7:00 p.m., on the 23rd day of August, 2022, in an amount not to exceed $1,300,000.  The City Commission proposes to provide for payment of the Certificates of Obligation from a pledge of an annual ad valorem tax, as well as a limited and subordinate pledge of $1,000 from the surplus revenues of the City’s museum and park system. The Certificates are to be issued, and this notice is given, pursuant to Section 271.041, et seq., Texas Local Government Code. 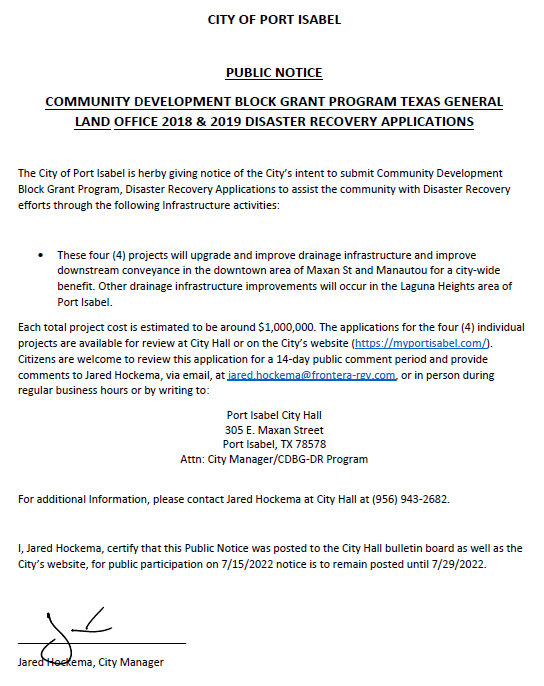 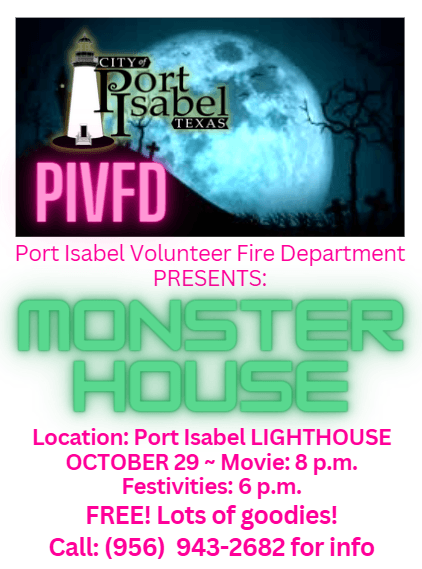 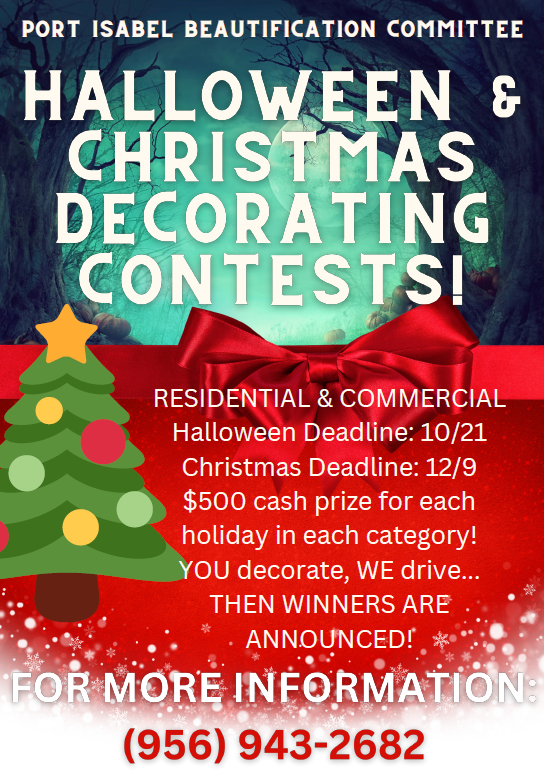 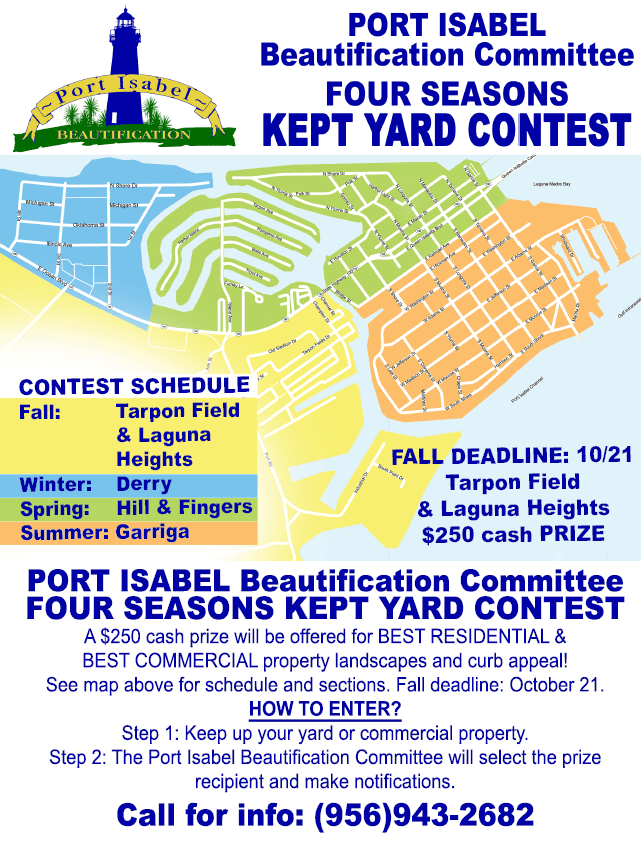 A City-Wide HOLIDAY DECORATING CONTEST for commercial and residential properties for HALLOWEEN and CHRISTMAS rolls out this week. $500 in prize money will be awarded for best decorated. Deadline for Halloween is October 21st. Deadline for Christmas is December 9. An announcement will be made after the Port Isabel Beautification Committee selects the prize recipients.

The FOUR SEASONS KEPT YARD CONTEST kicks off with the FALL KEPT YARD CONTEST. Cash prizes of $250 for best commercial and best residential fall kept yard property will be selected and a winner announced.

The Beautification Committee set aside sections for each of the seasons. Fall Season will include Tarpon Field and Laguna Heights; Winter Season is the Derry section; Spring Season covers the Hill and Fingers; and Summer Season is Garriga. Dates for Winter, Spring and Summer will be announced.

How to enter? Keep up your yard or commercial property and the Port Isabel Beautification Committee will be making rounds in the current season’s section or for Halloween and Christmas to select the best kept yard Residential and Commercial Property. Prize winners will be notified.

See attached map for color coded sections for the Four Season contest. For more information call City Hall at (956)943-2682. A total of $4,000 in prize money will be awarded by the Port Isabel Beautification Committee.

ATTENTION RESIDENTS OF PORT ISABEL IMPORTANT INFORMATION CONCERNING YOUR BRUSH / BULKY ITEM SERVICE <see full schedule>
Twice per month, (see schedule below), you will receive a brush /bulky item pick-up for a total of 24 collections per year. Please keep brush free of debris listed below under items not collected. Keep brush in a separate pile from bulky items (see below). Note: Brush must not exceed 8 feet in length. Please be sure to have your brush/bulky items at the curb and ready for pick-up PRIOR to your scheduled week listed below. Truck will only make one pass and cannot return for late set outs. If we have serviced your area, please do not set out any late brush/bulky items. They will not be serviced until following month.

IMPORTANT SERVICE GUIDELINES <see full schedule>
Please do not place items within 6 feet of any obstacles such as gas or water meters, telephone service boxes, overhead wires of any kind, parked cars, building overhangs, etc... In order to help achieve recycling goals please place your brush and bulky items in separate piles. We greatly appreciate your cooperation in helping us keep Port Isabel as beautiful as it can be! If you have any questions or service concerns, please contact Republic Services customer service at 800-423-7316.

View All
/FAQ.aspx
View All
/CivicAlerts.aspx

Notify Me® View All
/AlertCenter.aspx
Government Websites By CivicPlus®
[]